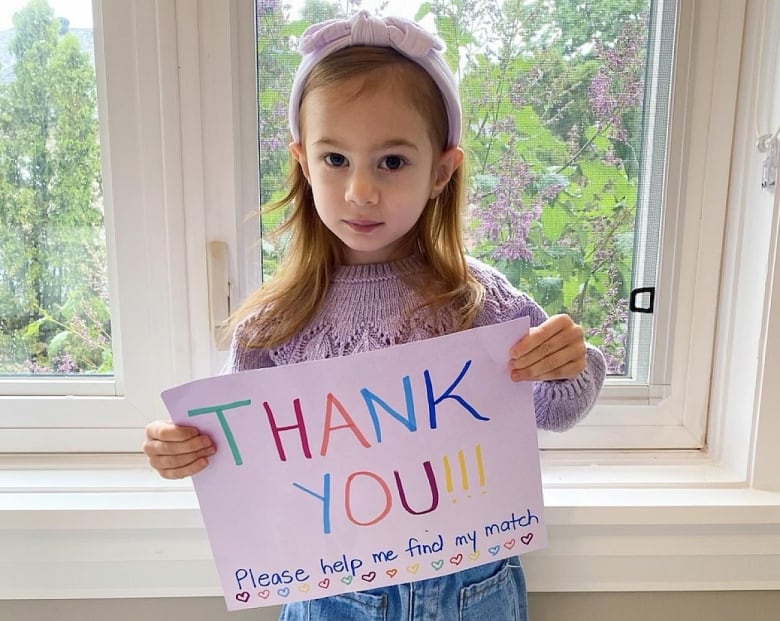 Three-year-old Leia Fallico’s life depends on a stem cell donation — but of the 40 million registered donors worldwide, not a single one was a match for the little girl this spring. “We’re really hoping that everyone who can goes out and gets swabbed and stays on the registry,” said Leia’s mother, Shonna. “They could be a person that could save someone’s life.” 1:35

Three-year-old Leia Fallico’s life depends on a stem-cell donation — the only cure for a rare genetic disorder that’s causing her bone marrow to fail.

But of the 40 million registered donors worldwide, not a single one was a perfect match for Leia this spring.

“Not even one,” said Leia’s mother Shonna Fallico.

Leia suffers from dyskeratosis congenita, which impairs the bone marrow’s ability to create blood cells. A severe case can lead to leukemia and other serious illnesses later in life.

The challenge is that she is of mixed ethnicity, Persian and European, which means she likely needs a donor with a similar background, who has a better chance of carrying the same DNA markers to make the transplant successful.

But in Canada, for example, only 3.5 per cent of registered donors are of mixed ethnicity and the vast majority of donors, about two thirds, are Caucasian, according to Canadian Blood Services.

It’s a devastating blow to Shonna and Marco Fallico, Leia’s father. The family from Vaughan, Ont. —  just north of Toronto — is now imploring people around the world to become donors. They’re hoping for a match that may save their little girl’s life and other kids like her.

“The outcome has to be good. There is no other possibility.”

Last month, Leia underwent a blood transfusion to help maintain her red and white blood cell and platelet levels, a stop- gap measure that will happen more and more frequently until she gets a transplant, Marco Fallico says. Leading up to the transfusion, when her blood count levels are low, she feels fatigued and bruises very easily.

Leia’s relatively stable condition could change at any time, her mother says.

“That’s why there’s this huge urgency for finding a match for a bone marrow transplant immediately,” she said.

They’ve raised more than $150,000 through crowdfunding to help with costs associated with Leia’s care. Extra funds will be donated to two clinical trials at Toronto’s Sick Kids Hospital aimed at treating and curing dyskeratosis congenita.

Anyone who wishes to register can do so through Canadian Blood Services or Swab the World.

Shonna Fallico says while finding Leia a match is her first concern, her heart goes out to other kids of mixed ethnicities who need a donor, too.

“They have such a low percentage of a chance to find a donor,” she said. “So we’re really hoping that everyone who can goes out and gets swabbed and stays on the registry. They could be a person that could save someone’s life.”

‘Their selfless act saved my life’

Close to 1,000 people in Canada are waiting to match with a stem cell donor, says Moneet Mann, a stem-cell territory manager with Canadian Blood Services. She’s part of the push to get more people registered.

“It should be such a broad registry that individuals shouldn’t have to wait for a match,” Mann said. “There should already be a potential match waiting for them.”

Patients sometimes have to wait months or years for a donor, Mann says. She was one of them.

She was diagnosed with acute myeloid leukemia in 2013 at the age of 24, and the only cure was a stem-cell transplant. Initially, there was no match.

Every week, she and her family held events to raise awareness about the stem-cell registry, signing up 2,000 donors. Then, six months after her diagnosis, Mann got her miracle.

“There was somebody in this world that ended up matching and agreed to donate their stem cells for me,” she said.

“And I’m basically here because of them. Their selfless act saved my life.”